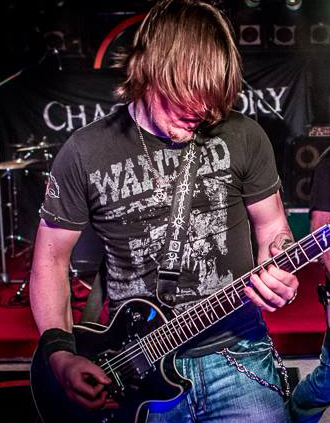 (Halifax) After 8 years founding Chaos Theory member Lex Coulstring has decided to leave the band. The band would like to thank Lex for all of his hard work, dedication, and friendship. We wish him well with his new project “Monsters Are Human”.  Chaos Theory will continue on business as usual as a four piece unit until a suitable replacement can be found.

“To replace a band member is never easy, but to replace a member who was the heart and soul of a band for so many years will be no easy task, and we will take our time and find the right person for the job.” – Rock Johnson

Lex’s official statement:
“After 8 years as a founding member of Chaos Theory, I am stepping down for personal reasons. I expect they will find a replacement and of course keep going and kicking your asses. I want to thank them for their hard work making CT the best it can be. I myself have a new project to slowly pursue while evaluating a direction in my life. So keep an eye out”  - Lex Coulstring
Tweet